I’d like to announce the following change. Firworks is being renamed to Firlights. It seems natural considering how many lighting videos I’m putting out, and how many I COULD make in the future. Nah.

I don’t know why but I buy a lot of lights: work lights, drop lights, flash lights, and even ceiling lights.

When Home Depot started running a deal for the new Milwaukee TRUEVIEW M18 Work Light I knew I was going to have to buy it. It just seemed too cool. Once I got it in I got curious how it compared against old halogen lights like I had used in the past. My halogen work light’s bulb was burnt out long ago as I’ve been using the Snap-On one from Costco for a few months now. I headed to the local Menards to get a new bulb and discovered I should basically just buy a whole new light as they were so cheap!

Thus, this shoot out was born. 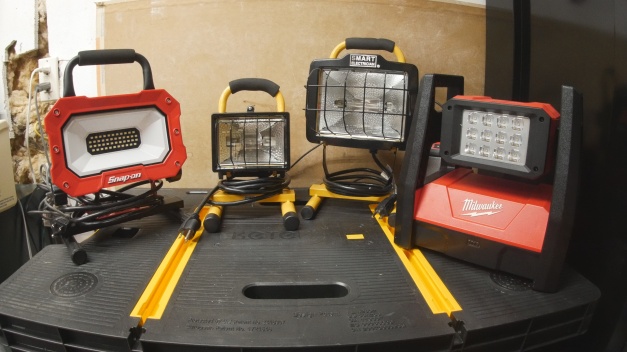 This is the standard crappy little light almost everyone has used. It throws some light and gets hot as the sun. I picked it up for 12$ at Menards and it came in a little kit with a hook, a stake for the ground, and a spring clamp for sticking it on bar shaped objects. The hook seems like a pretty good idea, but the spring clamp is not really strong enough to hold up the light, and has some other problems as well. It’s claim is 3900 lumens.

I already had the other halogen in my cart when I spotted this one. I could not believe the price: 11$! It came with an extra bulb as well, and for that price knew that it should be in the comparison too. It boasts the highest rated lumen output by far at 7900! If this thing could really provide so much for such a small cost I suspected we had a winner right then and there.

This is a light I picked up a few months back when Cost-co had these on sale. It was 29.99$. This has been the work light I’ve been using for a while now for night time car work. It throws plenty of light to replace a CV or do a brake job at 8PM. The build quality on it is surprisingly high and has a pretty rugged feel to it. It’s fallen over a few times / been knocked off a folding chair serving as a perch and hasn’t flinched yet. I like the concept of LED work lights because you don’t have to worry about breaking a bulb or them burning out. This light is of course not made by Snap-On, but Alltrade. I think they make most or even all of Snap-On’s licensed stuff like the hose reels, dinky little pressure washers and such that you will see at Sam’s Club, Costco, Menards or any other retail store. The rating on the light is 2000 lumens.

This is the light that spawned this whole test.

The M18 TRUEVIEW is another LED work light. It uses an array of 12 LEDs in some little funhouse mirror reflectors.

Think if they’d put that many LEDs in it in the first place… And then even MORE mirrors.

The whole body of the light is made of plastic, but it’s pretty hefty. It’s the heaviest of all the lights I tested for this shootout. Also some of the weight comes from the absolutely giant heatsink inside the head. Pretty much the whole head appears to be an aluminum heatsink. It says on the label that it will draw 1A at 120V so that’s 120w and anything that’s not coming out as light is coming out as heat.

The big trick this light has up its sleeve is that it can be corded or cordless. It has a power jack on the side which you can plug an extension cord into. It will also run on Milwaukee M18 batteries. The marketing claim for this light is that it provides 3000 lumens on high and will last for 2 hours on a 5.0 XC battery. On medium it will provide 1500 lumens for 4 hours, and on low it will provide 650 lumens for 9 hours. That’s really a very long run time for a pretty big light. If you need to work in places where the main electrical feed is shut off this light could be invaluable. Also if you already own a lot of M18 batteries you could keep this light running for a very long time even on high.

This light uses Milwaukee’s TRUEVIEW technology, fancy speak for LEDs with a nice color balance. The reasoning for pursuing nicer color balance is to make it easier to identify and separate colored wires when doing electrical work. Unless you are doing wiring though or mixing paint (I guess?) it probably doesn’t matter so much what color the light coming out of your worklight is. It’s not super obvious when comparing LED to LED but when you compare a Halogen to the TRUEVIEW lights it’s night and day.

One other feature this light has is a keyhole on the bottom so you can hang the light on the wall. I’m not sure what exact applications this would be good for, but it’s some added versatility I have not seen in other worklights.

Ok that’s enough about the competitors, let’s actually shoot out. I’ve put together some composites of the lighting performance of the different lights I tested in a few ways. At the end of the article I’ll include a link to the full photos in case someone wants to see all of them.

First, I shined the lights from exactly the same location in the same direction towards my back yard. The shed in the picture is 45-50 ft away from the light. The fence behind the shed is 65ft away. This is a composite of the center fifth of the frame for each of the lights / modes.

Next I put together a composite of the left edge of the frame for each of the lights to show which has the widest beam angle for the light.

After that, I brought the lights inside the garage and pointed them towards a busy corner with a lot of colors to see the color balance in action.

I didn’t do the same edge comparison because once I started looking at the photos it was very clear that the Snap-On light was covering the largest area.

That is really nice coverage for a single little light. I think it’s covering a wider area than my overhead lights, just not as intensely!

You can obviously make your own decisions about the performance of these lights based on the photos. Click HERE to see a full album of all of the shots. To me, it looks like the M18 TRUEVIEW was the brightest in all of the tests performed. In addition it had the “nicest” coloration in any of the photos. The widest beam in both tests was from the Snap-On. I would say the biggest surprises in all of this testing were from the Halogens. The 250w halogen claimed 3900 lumens on the box but was only somewhere in between the low and medium settings on the Milwaukee light as far as real brightness goes. In addition the 500w halogen light was not as bright as the Milwaukee light, despite having 2.6x the lumen rating!

I’d say if you just want to get the most light and don’t want to spend much money, grab a 500w halogen from your local big box. The performance / $ really cannot be matched by anything else. IF you want to step up to something a little nicer to look at with higher build quality, the Snap-On light from Costco provides very nice coverage, a fair amount of light output and very good build quality for only 30$. If you love Milwaukee stuff or frequently work in places with no electricity, then the M18 TRUEVIEW is a good option. The only problem with it is that it is so expensive at 150$. You can buy a lot of cheaper lights and still have money left over at that price point. One thing that can soften the blow though is the bundle deal HD is running right now to get a 5.0 XC battery. You can either use it or try to flip it on eBay to recoup some of the cost of the light.

If you can find the Snap-On light at your local Costco, buy it there as it will be cheaper. If you don’t have a local Costco or they are no longer available, you can get the light from Amazon here:
http://amzn.to/1niBTvM